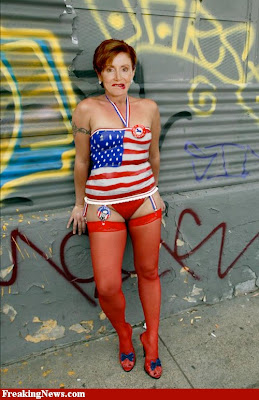 UPDATE: 2/6/12
By Nicholas Contompasis
Today Nancy Pelosi said she would back President Obama's attempt to take over the Catholic Church by forcing them to adhere to government doctrines.
I wrote this article almost two years ago and predicted this would happen. If you watch the video of Nancy Pelosi speaking to the Cathlolic clergy just before the passage of ObamaCare you'll see that she had already taken over the Church. The only problem was the clergy at the time didn't get it yet.

Maybe the American people will finally understand that ObamaCare is the complete takeover of Christian Churches, Jewish Temples and any other religious group in America. ObamaCare forces all religious groups to adhere to government doctrine as opposed to the faiths doctrine. This centralizes religious decision making to Washington D.C. bureaucrats.
Godless people make godless governments and godless governments have no respect for your life or your religion!

By Nicholas Contompasis
Excommunication would be too good for this truly evil woman. I’ve been watching Nancy for a few years now while still coming away with questions as to what “type” she is. Is she a nutcase, egomaniac, opportunist and just about a dozen more descriptive words that could sum up a personality? Well after this week’s performance by Pelosi to the Catholic Church one realizes that she is just downright evil. The comments made to the clerics instructing them on how to preach to their flock and what to say must have sent the Church reeling. For any politician with the unpopularity levels she has, one should think twice about addressing and instructing the largest organized church in America on how and what to preach.
The continual unmitigated gall of this woman keeps most normal thinking Americans spellbound as she reaches new levels of chutzpah. To actually, in public view, dictate to the church of her Italian background, say things that would normally be said in backrooms, one must wonder what is wrong with this woman.
If you’re going to manipulate, would you not want to be discrete about it. So what was her motive in dictating to the church, in public view, the way she did this past week?
Kings and dictators of old and new have and will always attempt to control the religions of their countries, this is a fact from history. The way Nancy Pelosi spoke to the church this week was the way a dictator would, like Hitler, Stalin, Mao, Chavez and Castro. The way Nancy Pelosi spoke to the church this week was intimidating and threatening. The way she spoke to the church was as though she had already taken it over.
Labeling Nancy Pelosi “Evil” is simply an understatement in describing her methods and means in destroying our country and its liberties. Her seemingly harmless cutesy delivery no longer works with the American people as she tramples on more of our rights every day.
So, don’t be surprised when you read someday of the excommunication of Nancy Pelosi from the Catholic Church for her attempted coup d'état this past week.

,,,,If the church doesn't ex-communicate her then they are no better than her....

You are brilliant Nick!

Silly woman said most of the people here came from somewhere else. I was born here I am an American by birth. Stupid bitch!!